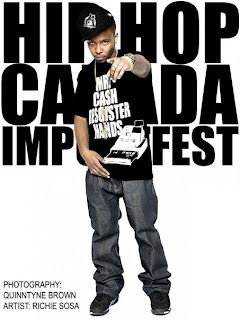 You're one of the sensations from across the northern border that is making some noise down here in the Southern U.S. Would you tell us a little about you and where you're from?

I'm from Toronto, Canada. I was born and raised in the east end of the city in Scarborough. My first record to really take off internationally was I BANG with Remo Da Rapstar, it was on over 150 different mixtapes and spun in high rotation on several stations including Shade 45. Since then I’ve been putting out music consistently, just trying to make a name for myself.

When did you first know that you wanted to pursue a career in Music?

The last time I got out jail. I spent a good portion of my late teens in and out jail. I knew if I stayed on the negative path I was on I would probably spend the rest of my life in jail or dead. I’ve always been passionate about music and I decided it was time for me to make a career out of it.

Many Hip-Hop artists often venture into other areas, are you looking at expanding into producing, label owner, clothier, or even acting?

I want to do everything. I'm a pretty creative person I have a lot of ideas. I’ll probably end up venturing into the television/film industry, if not with acting probably with writing.  I'm very observant of my surroundings, and I’m constantly finding myself witnessing the funniest situations, so writing comedy just comes naturally to me.

A lot of cities have virtually unknown Hip-Hop scenes, however very few people think about Canada and Hip-Hop. Even though this year it looks like Toronto could take the world by storm. What are your thoughts on the Hip-Hop scene in Toronto, and its ability to influence the American scene?

Toronto is definitely on the come up. Last summer Kardinal had tremendous success. He had a giant billboard with smash with Akon. This summer Drake has the industry on smash. His situation with Wayne is a beautiful thing, he’s constantly letting it be known that he’s from Toronto which is great. The pressure is definitely on Toronto right now, Drake has set the bar real high and the world watching to see what we have to offer next.

Some other artists from your area have crews behind them i.e. Kardinal Offishall has TDOT and Drake has ATF. Do you currently have a crew of producers or rappers waiting in the wings?

Of course. The Count Money Cartel (CMC) is loaded with talented individuals from across Toronto. From a music standpoint we got rappers, including: Bambi Bugatti and Knoxx Hoffa. We also got my lead engineer Sunny Diamonds, my photographer David Wilder. My team is loaded with talented producers as well; I’m managed by the biggest producer management company in the game, The Trafficker Management. Our production team consists of Mega Man, Y-Not, Soundsmith, Boi-1da to list a few.

Different areas have different slang, vernacular, or lingo. Most notable is the Bay Area. Will you put us on some of the Toronto slang game?

Strong Back: a girl with a fat ass.

I am quite sure that you've heard all the talk about Hip-Hop being dead or struggling just to breathe. What are you're thoughts on that,  and are you going to be the one to provide the much needed kick to put it back on track?

Hip hop is not dead and will never die.  Record sales are down on a whole. No release in all of music during the first quarter of 2009 went platinum in that time period. We can’t judge the health of HipHop on record sales. Hip Hop is alive and thriving as a culture. From a fiscal standpoint, Eminem’s got his album dropping this spring, that’s going to revitalize record sales for the first time since Lil Wayne’s album dropped.

Personally, I’m always trying to push life into hip hop. Every time I write a record or chose a beat, I always ask myself “has this been done before?” What I’m trying to do with music is express myself creatively in an innovative way that hasn’t been done before. With any art-form in order to have progression and in order to move forward you got to have innovation and originality.

You are dropping tracks like Nadya Suleman is pumping out children. At this point are you currently signed or in the works of closing a deal?

I’ve had a lot of offers recently, but getting signed doesn’t make you a star. I’m trying to put myself in a situation where the demand is so high for my music that a record deal makes sense. As of right now, a record deal doesn’t make sense for me, I'm still getting my music out to the world and making a name for myself. I’ve got a tremendous team surrounding me, allowing me to advance independently. Hopefully after I drop this next project I’m working on, containing all original production, my buzz will be high enough that I’ll feel comfortable signing on to a major label.

Since you seem to post new links to songs on the daily basis, how often are you in the studio?

I record probably twice a week a couple hours a session. A lot of rappers go to the studio to hang out and have fun. I enjoy recording, but I treat it like work, I go in and try to record quality over quantity. I try to keep my time in the studio as efficient as possible. Oh yeah, shouts out to Sunny Diamonds, Diamond Factory Studios, if you’re in Toronto it’s the best place to record.

What is in store for the upcoming year any tours, albums, or mixtapes?

You’re going to be hearing a lot from me. I have been doing a lot of features for artists. There are a couple mixtape projects dropping, I'm going to continue my SAMPLE ME series, Volume 2 is pretty much finished, hosted by homie Boodoo, Infamous Soundcrew.  I’m also recording an album, its all original production. It’s untitled as of right now, I’m trying to have it ready for this summer. It’s a very conceptual album, I’m having a lot of fun recording it and the production on it is incredible. I feel like I got the greatest producers, I’m experimenting with new sounds, it’s a real personal project and I can’t wait to release it.

For those that don't know you, what mixtape, album, or song would you say best embodies you as an artist?

Nothing that has been released yet, truly embodies my creative capabilities as an artist.

What major artists and producers have you worked with and will there be any future collaborations with anymore?

Most notably I’ve done a few records with Drake. Production wise I’ve worked with Megaman and Boi-1Da, they’ve produced for G-Unit, Young Jeezy, Lil Wayne etc. On my upcoming album I have a few crazy features.

What artists and producers do you want to work with both locally and nationally?

From a production standpoint, I have been very fortunate to be part of The Trafficker Management. Our whole movement has tremendously talented and contains established producers including Mega Man, Y-Not & Soundsmith, Boi-1Da, Zalezy etc.

Internationally, from a production standpoint I’d want to work with Danja/Timbo, Kanye and Dr. Dre.

There are many legends in the game, of those who is your Top five dead or alive MC's?

I grew up listening to Big  L, Rakim, Ghostface, Nas, Kool G Rap. Those are the artists that have influenced me the most.

If someone wanted to feature with you or request you for a show, how would they get in touch with you?

Send me a message a on facebook, twitter or myspace and I’ll forward you my contacts for my management team.