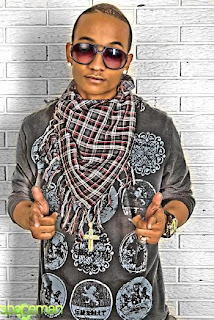 Check out the insight of this young man. Confident in his skills he stands at the edge of the game awaiting his time to shine. Introducing Rick Jewelz a young man showing tons of potential from Denver, Colorado. He is currently unsigned however he has worked with super producer Rodney "Darkchild" Jerkins. This young man is making some major moves. His diversity and creativity should carry him far. Look for Rick to be on a stage or TV near you soon!

With so many artists now entering the game, what sets you apart from the others? What should people know about your music before they listen?

I'm very versitile. Listening to an album by me would be similar to listening to a mix playlist on an iPod. I don't feel I have a sound like somebody else, it's just me. You might hear me do an RnB song, and rap on a verse, then the following track could be me rhyming on a pop track, or a techno, whatever.

Many artists have muses or find inspiration in many different ways. What inspires you to create, and how do you keep it new and refreshing?

I'd say life inspires me the most. I usually write about what I see, or experiences I've been in. Also I'd say established songwriters inspire me. I look at how they create and it helps me to be more creative.

Hip hop is an ever changing landscape, and people feel in different ways about it. Looking at the industry where do see both hip hop and yourself in the next 5 years?

I see Hip-Hop still being around, just maybe a different form of Hip-Hop, listening to it now it's not the same as it was in the 80's or even 90's, but I think it'll be around in maybe a different format to how it sounds. It seems like people are leaning more towards dance/rap nowadays so who knows.  And as for myself I see me as one of the top 10 Songwriter/Producers in the game. I work at perfecting my craft daily so I know in 5 years i'll be gettin the recognition i deserve.

When people hear your music, what message are you sending and what do you want them to walk away with from your music?

There are some very memorable acts in hip hop that will be remembered throughout history. Where do you want to be placed in the history of hip hop?

Producers often time kick it into over drive to create new and amazing tracks. When you can tell the producer has really got it in on the track, does it cause you to step your game up to match their effort? And do you feel that some artists don't step up to their production (without naming anyone)?

Of course, when I hear certain producers tracks that are just crazy it makes me want to load up my program right then and try to top it, I listen to EVERY little sound in the beat to see what it is they did different then what I usually do. And as for artists not stepping up to their production. I do feel a lot of them don't. They may have a hot beat, but barely get along as far as the track goes overall.

With so many amazing hits on the radio and TV right now, which tracks have you heard, and wished you could've thought of or been featured on?

I'd say Turn My Swag On, cause the beat and the hook is so similar to something I would make. Best I Ever Had by Drake, cause I've said almost everything he was saying on that track to females I've dated, but never formed it into a song. Shouts to Drake though he's mad talented.

I produce and write. I'm apart of the group Team Green Productions. Concept and Win schooled me on how to be the producer I am today. They're currently signed to Beat Bangers.

Simple as this, nobody really supports anybody out here honestly. It's get it how you live. Its a shame that people in their own state don't get love from their peers because everybody is so focused on themselves. Radio stations out here won't play anyone's track unless you cough up about 70 G's and nobody's throwin that out. I think it is important for local stations to play local artists though, it shows support.

Now artists have a plethora of mediums at their disposal to get music to their fans, however records sales are still failing. Do you think this is due to the economy, leaks, and downloading?

I think it's due to the leaks and downloading. The economy in my opinion isn't so bad that you can't go out and spend $12 to support your favorite artist. Its the fact that you can easily get the album you want online for free.

Speaking of downloading, many artists have taken the approach of "buy or download my music however you can get it just get it." This seems to be prevalent because artists are getting paid from touring in the absence of record sales. Would you agree with this sentiment? Why or why not?

Yeah I'd agree with it, because at the end of the day, they're paying more to see you on tour than buying your album. And as long as you have the fanbase for your tour you'll get your bread back.

Who were you influences as a child and how have they changed as you've matured?

Snoop and Dr. Dre influenced me to first start rapping, then when I got serious with it around 7th or 8th grade Fabolous has always been one of my main influences.

How important is it to show growth and mature as an artist?

Very important, I've grown ALOT since '99 when i first recorded. And even since 2007 when I released The Rebellion. Growth shows that you can move with the times but still be as good as your fans expect you to be.

Do you feel that there is a difference between Hip-Hop and Rap? Please explain?

Kinda/Sorta. It used to be "Rap" was more hardcore, and Hip-Hop was more socially conscious. But nowadays I feel they're almost one in the same.

Who are your top five dead or alive emcees?

I'll just list 'em, no specific order. Jay-Z, Fabolous, Jadakiss, Kanye, and I'd say Drake, cause he's the only person I feel that's young and really saying something.

Posted by Hip-Hop Examiner at 1:15 PM