The Art of Deejaying 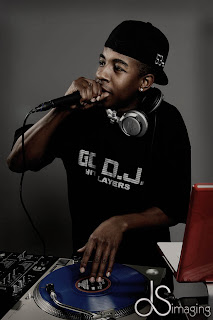 Dj C-Dub, is an up and coming Dj on the club circuit. He is also breaking into the mixtape circuit with his monstrous "TKO" series. This young man is definitely someone to watch. Just come to Nashville, TN or surrounding area to see what the buzz is about. From scratching to artist breaking, Dj C-Dub is about his business and heading for greatness. Stay tuned and keep it lock on C-Dub. You will definitely be entertained. "Dj C-Dub Is The Knockout King!"

Hip-Hop Examiner: So for those that may not know you, who is Dj C-Dub?

Dj C-Dub: Dj C-Dub is the knockout king in Nashville, TN! I have my own creative style and talent. C-Dub, C comes from Corey that is my first name, and the Dub I came up with that from if you look it up in a dictionary like dubbing a tape it means to copy. How I came up with that is from when I travel to go see other Dj’s I see what their craft is, I copy it, create my own style with it, then bring it back home and create something new everybody hasn’t heard yet.

HHE: How did you get started and how long have you been in the game?

C-Dub: I’ve been in the game since November 2006 so that’s about two years. I’ve worked at the skating rink since I was about 16. When Dj C-Lo came to the skating rink to start Djing “Old School Sundays,” and when I seen the actual craft of using turntables I said "that’s what I want to do," cause I liked it. I’d go over his house every now and then, he’d actually show me how to mix songs together and blend two records together. Once that came about I’ve been on my own and every since then he says "I’ve created a monster!"

HHE: How difficult would you say it is to get into Djing?

C-Dub: You just gotta have a love for music, and an ear for music. Once you understand beats per minute and how to mix songs together then you’re good to go.


HHE: In what other capacities do you work other than as a Dj; are you a producer, rapper, songwriter, engineer, or event organizer?

C-Dub: Right now, I call myself an event organizer; I am getting ready to start my company D.U.B. Entertainment. D.U.B. also comes from C-Dub and is an acronym which stands for “Doing it Up Big.” I wanted to try to do something different in Nashville, and try to bring artists in. I have a connection right now with F.L.Y. they sing the song “Swag Surfing,” trying to get them to come in and just start D.U.B. Entertainment off right, to bring something new and something different for everybody.

HHE: As a young DJ in the game who were your influences? I see you mentioned C-Lo earlier.

C-Dub: Yeah, he’s one of them without him I wouldn’t have learned how to work them 1’s & 2’s. As far another influence I’d have to say Dj Ajay the guy that’s over the Derrty Dj’s based out of St. Louis. He works or 100.3 The Beat. He works in the program department, so seeing him work radio he does the five o’clock mixes at the radio station, does the hottest nightclubs at night, does concerts, finds sponsorship money, brings artists in, still runs the Derrty Dj’s, has us come in, he pays us, he gets a lot sponsorship, he’s involved with Pepsi (Pepsi Dj’s), he has a lot going on as far as Dj’s. Also, he works on promoting artists to record labels.


HHE: What would you say a Dj's primary job is and what skills should a Dj possess?

C-Dub: I believe there are two things a Dj should have. One thing is a Dj should break new records. It’s cool to be playing the same Webbie and Lil Boosie, but if you see a song that’s hot that’s not playing in your city that’s playing in another city you should network with other Dj’s. You should want to be the first to break it in your city. So you can say I broke that record right there nobody was that record right there until I started playing it. It makes you feel better as a Dj instead of just copying everybody else and doing the same thing. Another thing is a Dj should be an entertainer. That’s what people paid their money for to be entertained. When Ricky Smiley or Steve Harvey or Cedric the Entertainer gets up on that stage they are entertainers. They are there to entertain the people; the people came to pay their money to be entertained. So a Dj should get up there and entertain. It’s more to it than just playing songs or pushing play. You have to react with the crowd and get them to react back, so when they leave the club they want to say “Dang I had a good time. C-Dub rocked it.” So I feel that’s what a Dj should do.

HHE: I see you mentioned Derrty Dj’s earlier what Dj crew are you currently affiliated with?

C-Dub: Yeah, I am a part of Derrty Dj’s based out of St. Louis, the Futurestar Dj’s based out of Florida, right now though I am doing my paper work for the Core Dj’s that’s one of the bigger crews. A lot of their members do radio or they get on TV. They all network with each other. Tony Neil is over that. That’s my next move, and I am getting ready for the Core conference in April.

HHE: In listening to lots of mixtapes and frequenting clubs I've noticed that the art of scratching seems lost. However I did notice that you and Dj Crisis had a battle of sorts showcasing your skills. It was reminiscent of the "Juice" days and old school Hip Hop. Do you think that the art form is indeed lost or is it just not popular?

HHE: As a Dj I know a lot of artists are constantly trying to get music in your hands. Where do you see Nashville's Hip Hop scene within the next 5 years? Do you think it will be a hot bed for artist similar to Atlanta?

C-Dub: Nashville can be like that, but Nashville is closed-minded on music. If they have an open ear to more music it can be like that. Another thing is Nashville doesn’t have that outlet for new music. Besides 101 The Beat, and the reason for that is the way the programming is going over there. Programming is a little better, and the radio station is more community oriented. I feel that the new music can come to the radio before it hits the clubs. But, it’s the other way around the new music hits the club first, then its dead in club by the time it hits the radio, people are like “Man that’s already old.” So, it should be the other way around.

HHE: How many artists have you helped in their pursuit of stardom and are you currently associated with any artist?

C-Dub: Yeah, I’m associated with Rip “Cashville’s Ace” I am his Dj you know getting his thing started and off the road. Also Semi, he’s an artist here I am working with him.

HHE: I noticed that last year about April 5, 2008 “Keys 2 tha Chevy” was reached number one on the Billboard Hot R&B/Hip-Hop Single Sales.

HHE: And for all the fans of the "TKO" mixtape series, when will the next installment drop?

C-Dub: Matter of fact I am going to put it on Facebook today. You can get it on Facebook or you can shoot me message and get a copy. I am not going to press up many of this mixtape. It’s the “I’m So Cashville Mixtape.” I’m promoting artists from here that submitted music to me, and I feel that are sufficient enough to move on to the next level. I put them on their and mixed it in with a lot of Gucci Mane, Soulja Boy, and stuff like that. I tried to give you a variety so you’re not just listening to all of Nashville and bore you out. I mixed and blended it together. I’m working on Round 5 it should be ready by the end of April.

HHE: In recent years, there have been several DJs that have reached super stardom. Is stardom and albums in your future as well?

C-Dub: I would like to that. Get some hot producers on there and help produce the artists and also produce myself. Of course, I want to scratch and mix the songs on there. I believe a mixtape is not a mixtape unless you mix the songs together. If I do get that deal and get up there, you better believe that them songs will be mixed blended on the album.

HHE: Not to offend anyone but other than you, who would say is the hottest DJ in the city?

C-Dub: The hottest Dj in the city I’d have to go with C-Lo. If you checked the records there is not a one that says I don’t like him or I can’t stand him. He’s good with the Grown and Sexy crowd, college crowd, or weddings he’s an overall versatile Dj. Not to down anybody but each Dj has their own style. Whether it’s being good at the hood clubs, just good on the mixtapes, or throwing parties to make money, but as far as being versatile for the people I’d have to go with Dj C-Lo.

HHE: Do you have a weekly schedule, if so where can people catch you?

C-Dub: I do not have a weekly schedule. With me being from Nashville, I am busy doing teen parties, or I am doing house parties, or I’m doing weddings, or I am doing 50 year old birthday parties, even though I go to Tennessee State University I am not doing a much there as I should, but I am busy doing other stuff. Like Lane College, I am at Austin Peay a lot; I was up there three times last week. April 3rd and 4th I’ll be in Little Rock Djing for an artist showcase. So I am busy doing other stuff, you just have to call 615-482-8687, you just have to call me cause I’m hot and I’m moving around.

HHE: How do you balance the two demanding schedules of being a Dj and a fulltime student?

C-Dub: I got to! It’s hard, it’s sacrificing. I also have a car note and phone bill. I look at it as do I want to go out of town and network or do I want to pay my car note? Djing is working and paying my car note. Djing is cool but I also have to get out and network with other Dj’s whether you need other records, whether you need advice from somebody that already been there, or if you if you just the upper hand, or if you need a connection or a link to something, whether it’s trying to be on TV, or on radio trying to get a slot on radio. If you’re trying to get anything you need to network and build a relationship with other Dj’s. So when they say Nashville, TN what’s the first name that comes to mind? That should be C-Dub. You should want that relationship with other Dj's. Not to walked around like you got the “big head,” but also be humble and hear what other people have to say.

HHE: Who is your top five DJ's of all time?

HHE: In order to really get a feel of the epitome of a DJ who should people check out?