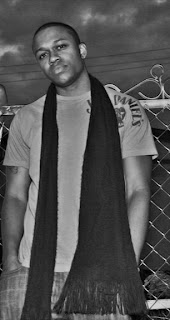 Recently, I was afforded the opportunity chat with a good humored emcee from Nashville, TN. This MBA graduate and former Belmont student has grown drastcally as an emcee. Stix has gone from gritty to insightful, meaningful lyrics. This artist now expresses a depth rarely seen by artists his age in this day and time. To put it simply Stix Izza beast!

Life has been cool, moved out of the city and moved back. Put out 8 mixtapes, won mixtape artist of the year in 08, worked with some major artists/ producers, been on a couple tours, just been working, and preparing the release of my new cd now. Although the last three months I have been completly shucking and not releasing any music, which will all be discussed on my new CD.

Stix Izza, when did you throw the Izza at the end? Was it due to copyright infringement from the old rock band?

[Laughs] Nah it wasn't becasue of the rock band, shout out to them. I think they spelled their name Styx though. But I did a song off my first cd titled "Stix Izza." At the time I went to college at Belmont, and my friends used to just call me Izza after that. So, eventually i just put the Izza at the end of Stix, and it just stuck with me

When did you decide that music was the path for you?

I decided music was my path when i was writing songs instead of going to class and got kicked out of school [laughs]. Nah but seriously it was when I was in college and didnt think about anything but music every day. And that it was something I had a passion for and wanted to excel in that. So wit that being said, I just went after it and havent looked back since.

How long have you been writing and rapping?

I would say around 9 years. I wrote my first song in 8th grade. I went to high school at MBA (Montgomery Bell Academy), and played basketball there. On our road trips I used to freestyle on the bus an p**s people off [laughs]. I didn't take it to serious then.

We all know you rap, but do you also produce or ghostwrite at this point?

Yeah, I have just began to produce my own records. Which is a plus for me, and I've been ghost writing for artists/singers for the last two years, and not only hip hop either.

You're from the south and that may come as a shock to some. So what do you think about the current state of Hip-Hop is it dead, on life support, or thriving in the south?

I think it is alive and well in the south, but its seems people are angry because New York doesn't have the game in a cobra clutch any longer.
I think mainstream hip hop should incorporate more real lyricists into the their equation. I don't think hip hop is dead. I think it lives everywhere. It's not that serious to say it's dead. The labels might have watered down the mainstream hip hop but it lives everywhere, and especially in the south.

If memory serves me well I believe you were once affiliated with All-Star, Young Rell, Broadway, and those guys. Is that still in effect, and are you affiliated with any other local producers or artists?

Yeah, I've worked with all those guys. I started off with Rell ,Star, Paper, Fate, Coop, and etc. Broadway produced my entire first two cd's, so shout out to him. I've been working with a singer/producer/party and event planner Mario "Rio" Moore, lately as well. Ocean Jones and myself just recorded a new record with Young Buck. I also just did a record produced by super producer Craig King called "Stay Away," but i work with alot of guys from Nashville, its where I am from.

How would you describe your style?

In what ways do you believe that you have grown as an artist?

I've matured. I use to rap about a lot of things just to be rapping, for the hell of it. Now my songs have substance, meaning, maybe they help some people get through their day, maybe they don't, but it's about real life. Not just about one subject matter like I used spit about.

Many people have different opinions about Hip-Hop and what it is. It seems to have started in simplicity, however people now think it has to be complex. What do you think defines true Hip-Hop? Is it gripping lyricism, incredible metaphors, colorful stories, or is it just whatever drives a person to create, and spit words to a beat?

I think its creativity honestly, and having the courage to say what u want regardless of what people will think, and how they look at you. It is expressing yourself as a person.

Were you once signed to an indie label, and are you currently signed or in the works of closing a deal?

I used to be in a situation with an indie. Where i moved to Charlotte, NC, but I'm back to Nashville now. I am strictly just Stix Izza. I've been in talks with other indies, but I don't know if that's where I want to take my career right now.

Do you currently work closely with one producer, or do you try to branch out for a more diverse sound?

I have been in the studio a lot with Rio. Who sings as well, but I will branch out. I want to work with whoever wants to work with me and has alot of positive energy and creative ideas. I'm sick of the norm!

Are you currently working with any celebrity DJ's like DJ Drama, Clinton Sparks, Teknikz or Chuck T?

I've done one mixtape with Dj Chuck T called "Gotta Get It" which was a cool mixtape to me. I've been in contact with Dj Smallz and others, but right now I've been focusing on releasing an album more so than a mixtape.

For those that don't know you, what mixtape, album, or song would you say best embodies you as an artist?


Probably "You Should Love Me," I think that's a hard record people should listen to!

There are many legends in the game, of those who is your Top five dead or alive MC's?